Introduction - Sri Maheshwar Shahi S/O sri Ashutosh Shahi is 36 year old of village & post Riyaon , Block- Gagaha District- Gorakhpur (U.P.) belongs to general caste community with 9 family members. His family condition was very poor and due to economical constraints he stopped study after intermediate. After that he started his parental occupation of Agriculture on 4 acre area by traditional system but output was very poor. He used to grow paddy and wheat for his survival under Paddy – Wheat cropping system but he was not able to fulfill the essential requirement of family members. One day he came KVK Belipar and met with KVK Scientists. After discussion he shown keen interest in training on Poultry farming and received training for 5 days 7-11.09.2015 . After completion of the training he started commercial broiler farming with the technical guidance of KVK Belipar in capacity of 7000 chicks in one crop.

KVK intervention - . He started commercial broiler in integrated approach of feeding , housing , health and marketing management with capacity of 7000 improved vaccinated chicks. In first crop profit was not much better due to feeding cost. After that on advice of KVK Scientist he grown maize and incorporate with poultry feed upto 30% without any adverse effect on body weight.

The expenditure and income of Mr. Shahi’s broiler farm per broiler is as follows

Outcome- This enterprises promoted entrepreneurship amongst youth in surrounded area and earned about 20000 to 40000 per month. Sri Maheshwar Shahi awarded as best poultry farmer by NDUAT Kumarganj, Ayodhya and honoured by Mini. Of Agri. UP Govt. 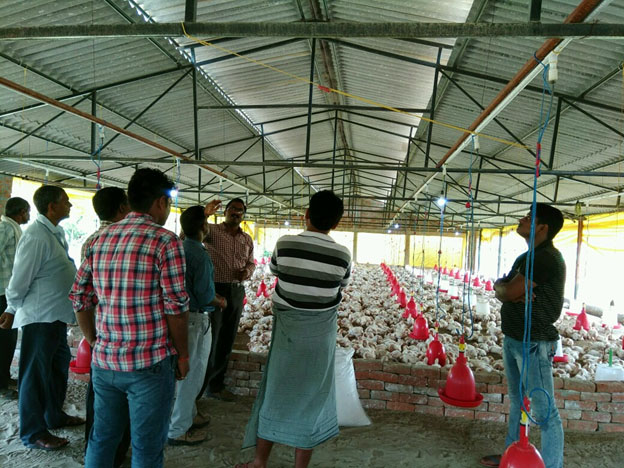 Mr. Anand Kumar Nishad is a 50 years old marginal farmer of village Pavenpur block Piprouli district Gorakhpur. He is owner of only 30 decimal (0.30 acre) land and 1.0 acre land taken on lease at Rs. 20000 for one year. He has 7 family members with 4 girls and 2 boys. Mr. Anand is illiterate but his all girls studying in B.A., B.Sc., Intermediate and 10th class respectively and both boys also studying in B.A. & ITI and 6th class. Mr. Anand growing of vegetable only i.e. cucurbits, carrot, radish, beetroot, spinach, fenugreek etc.

Interaction with KVK: Mr. Anand attended trainings at KVK and selected by KVK for demonstration and provided improved varieties of vegetable seeds and technology. He earned a good yield hence for further doing something new, he contacted to Dr. S. P. Singh, Scientist (Horticulture) KVK Belipar, Gorakhpur. He discussed about low yield and net return from vegetable production therefore, KVK scientists suggested him to adopt off season and early cultivation of vegetable crops with improved technologies for quality based production.

Innovativeness: Mr. Anand is hard working farmers and he is able to grasp the technologies faster and adopt it. He is actively involved in all day to day working of farm and marketing. After training at KVK he is able to identify insect pest of cucurbits, onion, radish etc. and their management practices. He is actively guided to other farmers in adoption of new technologies.

Mr. Anand’s field divided in two parts one part of size 1.0 acre which is use cultivation of bottle gourd, sponge gourd and bottle gourd in relay cropping with machan technology and Another 30 decimal (0.30 acre) area use for cultivation of short duration vegetable crops for earning daily income to fulfill the basic needs of family members.

With new technology provided by KVK, he is getting 7-8 lakhs net income per year from 1.30 acre area and have good social status.

Cultivation of bottle and bitter gourd through machan technique

Impact: Cultivation of cucurbits through machan technology and inter cropping of vegetables disseminated nearby 7 villages and 67 farmers benefited through adapted this technology and earning regular income through vegetable production and improve economic status of farmers.